So we made the trek up for the week, and when we got here we were amazed at the beautiful weather. Then, today, the weather gave us a cold, wet, slap in the face. This is one of the reasons we moved back to Texas. That, and the fact that we live like kings in San Antonio on salaries that would put us just above the poverty line in Chicago.

We’re looking forward to seeing some family while we’re here, but mostly we’re enjoying just hanging out and having four extra hands to help with Rachel.

Well, I’m glad to know that my nieces can supposedly read and understand my blog. Not that they do, read it, that is.

I’m still having fun with it, and as long as the fun continues, the blog continues.

Two years. Who knew I had this much crap to say?

Yesterday, you turned 17 months old. Pretty soon, you’ll be a year and a half, and before we know it you’ll be off to college! Your biggest accomplishment this month is finally letting us know that you know who we are. “Mama Dada” is a common phrase when we’re both around and when we’re not, you’re constantly asking us where the other one is. To a stranger, it might look as though you’re confused about who your Mama and Dada are, because if you’re with me, you’re always saying “Mama….MAMAAAA….mama….MAMAAAAA,” but it’s always with a questioning look, like, “where is that other person who pays attention to me?” One of your other big things this month has been asking us what everything is. You’re at a very inquisitive time of your life, and you want to know about everything around you. Any time you pick up something, or we pick up something, even if it’s something you’ve seen million times before, you’ll point to it and ask, “What is that?” Since “what is that?” is one of the four things that you know how to say really well, you say it a lot. So you’ll point and ask, and we’ll tell you, FOR THE 800TH TIME, IT’S TOAST! YOU HAVE IT EVERY MORNING!. But really, we’re thrilled that you’re communicating with us in a way that isn’t screaming. The last big thing you learned to say this month was “bye bye” except you don’t say it like that. You say it more like the SNL airline skit – “buh bye.” You definitely know when to use it. When we’re leaving to go to Judy’s in the morning, you’ll tell Mama “buh bye,” and this morning, when I was trying to get you to pick up some toys, you looked at me, said “buh bye” and walked back to your room to play. My jaw dropped because, well, just the attitude you had in walking past me and saying “buh bye” seemed almost adolescent. You’ve become very attached to your Raggedy Andy lately, to the point that you won’t let us take you out of bed in the morning without him. He accompanies your everywhere, until you find something better to play with, then he’s discarded on the floor. You talk to him and hug him and kiss him when we put you to bed at night, and when we go in to check on you, you’re usually sprawled out on your back with him underneath you, effectively smothering him. You were sick for a good part of the month, and we were very worried about what might be wrong with you. It turns out that there really wasn’t anything wrong, you just picked up a bunch of stuff all at the same time. You were at the doctor’s office three times this month because we couldn’t get you to stop pooping. I’m sure that’s entirely too much information, but I just wanted you to know that even before you turned two, you were full of crap. Because of your sickness, we had to start giving you soy milk instead of regular milk, which you seem to like just fine, but I think we’re going to try to get you back on regular milk so your tummy gets used to having dairy again. We took you to the beach for the first time this month. Actually, it was the second time. We visited the beach when Mommy was pregnant with you, too. But it was the first time you got to see it for yourself. Since you love the water, you had a great time wading in the ocean, until you fell in and got all your clothes wet. Even, then you were still having fun, but it was very windy and you started to get a chill, so we changed you out of your wet clothes and into the only dry ones we had, then made you stay out of the water the rest of the day. You still had a great time on the beach, asking us what everything was, but the trip there and back almost killed your parents. For some reason, you decided that you didn’t want to sleep in the car, and you weren’t a very happy little person, which made us not very happy. Lastly, this was your first Halloween where you went around and begged for candy from strangers. Last year, you were too little, and too tired, and we had just moved to our new house, so we just put you to bed. This year, we dressed you up like a dog and dragged you around the neighborhood until you cried. “No MORE! I cannot HANDLE the FREE CANDY!” Actually, you did pretty well, until you decided that you didn’t like the hood of your costume (I’m sure it was hot) and you’d been walking for more than a block. You were a bit shy when it came to saying anything, even “hi” to our neighbors, but that’s OK…you’ve got plenty of years ahead of you. Next year, you’ll be able to tell us what you want to dress up as, so you won’t have anyone to blame but yourself.

Congrats are in order for my sister and her boyfriend fiancé! They have been dating for two years, and over the weekend, Britton popped the big question. 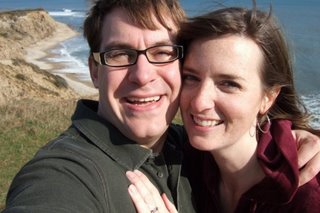 So I guess this means that we’ll have to go to New York at some point in the next year…I guess I’ll have to brush up on my cussing so I won’t look like such a tourist.

Congratulations to both of you. We can’t wait to finally meet Britton at Christmas. We’ll have the BBQ ready.

Ahem…don’t you have an announcement you should be making on your blog?

Yeah, this pretty much sums it up. Rachel made it to about 6 houses, and we were done before 7. I guess her “dogs” were barking.

Anyway, here’s a picture from the party last Friday at Pete and Carol’s. Rachel and Matthew had a great time.