Sort of. There are still obvious mistakes in the wall, so I think at some point this spring, we’re going to re-paint with a texture paint to hide the mistakes, then paint over that with the brown….Oat Straw to be exact. We may also end up painting the whole room in Oat Straw, and going a touch darker on the far wall. Or not.

At any rate, this part of the project is complete. I love the new lights…they make it look like such a modern house. Let’s review again how this thing progressed, shall we?

This was how our wall looked up until 13 days ago. Let’s disco, baby! This picture was taken in June 2004 when we first looked at the house. 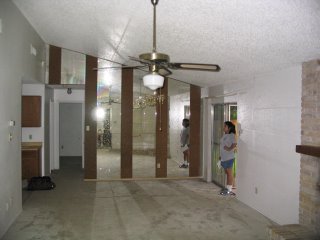 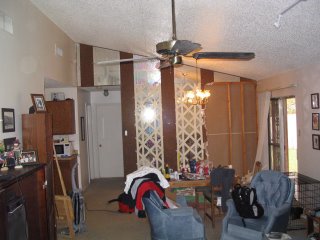 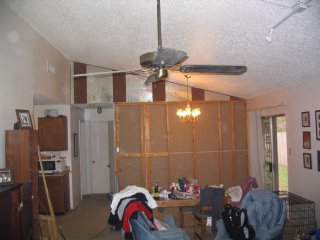 On Monday of this week, Andy came over to help me hang sheetrock with the suppies that Gregg graciously brought over. And finally, today. The finished product. 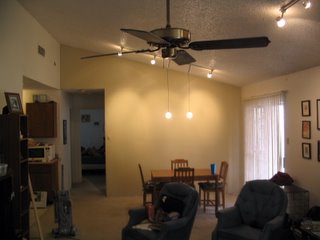 Here’s a more dramatic, “While You Were Out” look at it, with out the fan in the way… 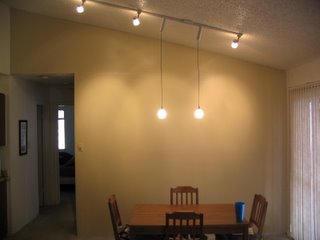 In my haste to make a post the other day, I forgot the thank Gregg for brining over the finishing supplies so that my wall didn’t look like a jigsaw puzzle. I mudded up the wall, put some tape down, and since I’m not a pro at this, left bubbles in the tape, but I put primer on it anyway (thanks again to Gregg), and then it really didn’t look right, so I went back today and re-mudded the spots that looked bad. It looks much better now, and I’m just waiting for it to dry so I can sand it and re-prime it, then it’s off the Home Depot to get some paint and a new light fixture.

I “painted” the wall virtually so we could try out the colors. We’ll see how it looks compared to the real thing once it’s all said and done. 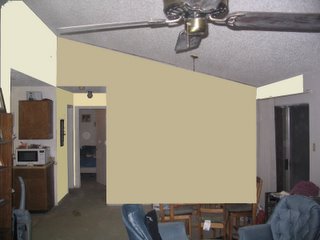 Not too shabby of a job for amateurs. Much thanks to Andy for helping me out. Tomorrow…the mud. 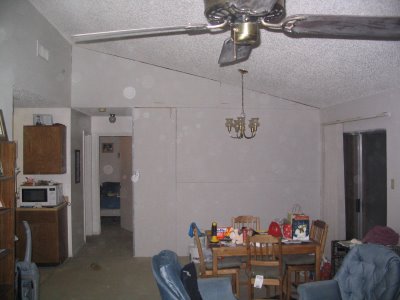 Since I left my camera at home, I had to use the phone cam. Evidently, it doesn’t take far-away pictures as well as it takes close up pictures. 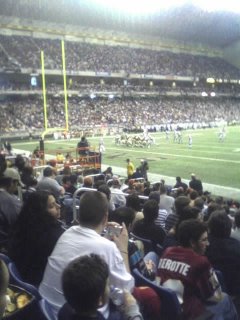 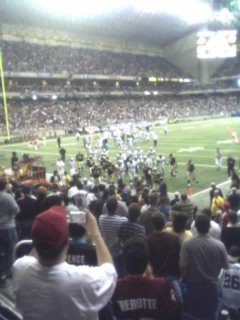 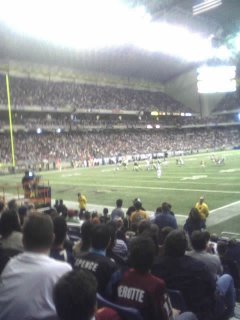 We left the game with about 90 seconds. The Saints had a 2 point lead when we left, and as we were walking throug the stadium, the Lions were stopped cold for 3 downs. Evidently, though, the made a huge connection on 4th down and won the game by 1 point. Go figure.

He wears the “Santa’s Helper” bandana with pride. The antlers…not so much… 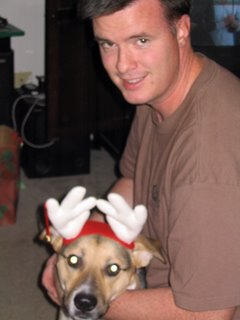 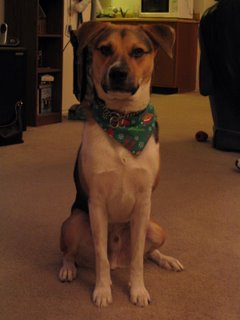 Yesterday I went shopping. Most of the shopping was done online, but I did have to go to some real stores and deal with real people for some of it.

And that just served to hammer the Christmas spirit right out of me.

I hate crowds. The reason I hate crowds is because there’s always stupid people in crowds. You know the kind…the ones who walk slow and take up the entire walkway while gesturing wildly with their hands or stop every 10 feet to look at something? The “slow and wides” as Mom and Dad call them.

Well, here in San Antonio there’s another kind of stupid, along with the slow and wides. They’re the “I’m-trying-to-be-fashionable-in-my-winter-clothing-even-though-it’s-almost-sixty-degrees-outside” stupid. They were everywere. The typical ITTBFIMWCETIASDO stupid person is a teenaged girl, although I did see some 20-somethings too. They’re so easy to spot, too, because they’re wearing a scarf and possibly a stocking cap, although not down over their ears like people do when it’s actually cold outside.

But what really gives them away are the boots. You know the ones–the Uggs that Oprah likes so much. I think they’re called Uggs because they’re frickin UGLY. These are the kind of boots that you should be wearing if you’re in the Arctic or Chicago during the winter (because there’s really no difference between the Arctic and a Chicago winter, except…no penguins in Chicago), but you sure as hell shouldn’t be wearing them when it’s 60 degrees outside!

I recall Oprah (yes, I watched the other day…I’m on break, remember?) saying how warm they kept her feet, and all I could think about yesterday when I saw these teeny boppers wearing them around in the mall was how badly their feet must be sweating, and what a lovely aroma that must produce.

And I didn’t even need any help from Andrew Dan Jumbo, or Ty Pennington. Just over three hours from start to finish, and that included clean-up! Here’s the evidence:

The first hole in the wall was made just before noon… 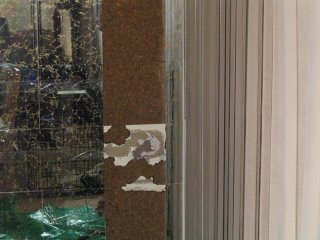 During…I went a little nuts with the masking tape…

Finished with demo, just after 3 PM.

I left the top because there’s nothing on the other side of that wall except attic, and I didn’t feel like leaving our house exposed for the next couple of days. We’ll get it done when we’re ready to drywall.

Now I just need to get the crew over here and we’ll drywall and paint! 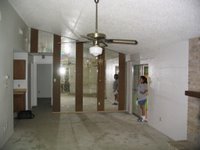 I think I may have been watching too many home improvement shows. This weekend, I’m going to take on the task of destroying the “wall o’ mirrors” in our house. Hopefully, the rest of our house will still be intact after I’m done.

Of course, destroying is the easy part. After that, I have to put the wall back up, sans mirrors. This is going to prove to be interesting, as I’ve never put up a wall before. I can only hope that it doesn’t look like a totally amateur job. I’ll post pictures as the process moves along.

Some cute dog and wife pictures for you… 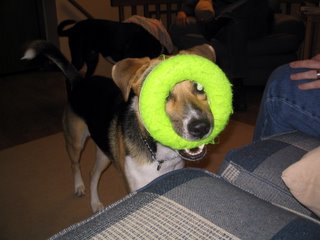 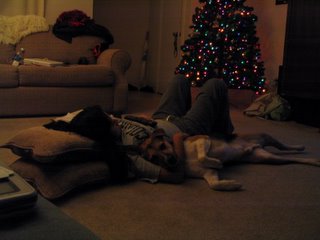 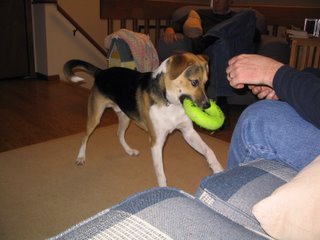 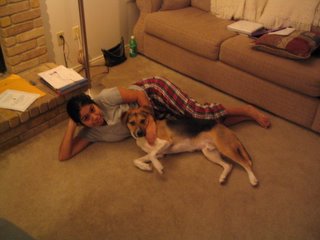 Yes, you read that right. I published a book.

Seems like the whole Laleman family is getting into the book biz. Maybe I can get my mom to sell my book at her store…maybe not.

I became interested in trying my hand at book publishing after reading this post on Dooce. I never realized that publishing my own work could be so cost efficient. I’ve created photo books through Apple’s iPhoto before, but they were really expensive, and I wasn’t all that impressed with the quality.

I still haven’t received my copy of the book yet, but I’m expecting it sometime this week. It’s a collection of photos from our honeymoon this summer (no, not those kind of pictures…landscape pictures). I already know one thing I need to revise in the book–I didn’t give Monica credit for the photos she took, and I just know I’m going to hear about it.

Anyway, you can check it out (and buy a copy if you want!) through Lulu