It seems like Cubs fans are as split on this decision as America was (and still is) on the election.

I, for one, am in the relief column. I think Woody should have been let go a long time ago. He was a great pitcher when he was young, but he never corrected his mechanics and it led to years of injuries and paying him millions of dollars for not pitching.

If you ask me, he and Prior should have been cut the Cubs should have kept the core of their starters from the 2003 season, instead of dismantling a team that came closer to a World Series than any other Cub’s team since 1945.

So long Kerry…thanks for the memories. Maybe we can use your salary to buy some decent pitching.

So the Cubs got swept out of the playoffs. Yet another disappointing end to what I think was a mediocre season. If the Cubs had been in any other division, they would have never made it this far. They dropped three in a row in Florida when they needed to tie up the division. They backed into the playoffs on a Milwaukee loss, after battling against themselves the entire second half of the season.

The fact is no team really seemed to want to win the central…the Cubs just didn’t want it less than Milwaukee and St. Louis.

I mean, let’s be serious here…this isn’t the team from 2003 that had everything going for them. In fact, let’s talk about that for a minute, shall we? A team that was just 5 outs away from the World Series, and where are all of those players? The only position player left from that team is Aramis Ramirez. The only other players left are Kerry Wood, who, let’s face it, is pretty much worthless to the Cubs now, and Mark Prior, who hasn’t thrown a single pitch in a major league game this year. This was a team where the middle of the order was as strong, if not stronger than the top of the order, they won a ton of games, won the first postseason series since 1945, and they dismantled the team.

Yeah, the Cubs front office sure knows what it’s doing when it makes those trades, doesn’t it?

Since these guys made the playoffs this year, I’m sure they’ll trade Soto next year, probably keep Kendall as their everyday catcher, and they’ll trade Lee and Soriano for sure.

I’m very excited that the Cubs clinched the central division last night. I stayed up to watch the Brewers lose, allowing (in my opinion) the Cubs to back into the division series. If the Cubs had showed up in Florida at all, they would have clinched earlier in the week.

No way am I this excited:

The Cubs have been at this point four time during my life, and every time they’ve failed to deliver. They choked earlier this week in Florida, and have been inconsistent the whole year. I’m just waiting to see which Cubs team shows up for the playoffs.

If they make it to the World Series, I’ll be excited. If. 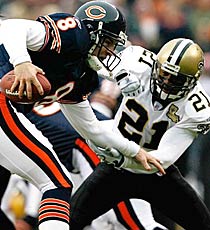 Unbelievable! Even more unbelievable that I was a young lad of 14 the last time Da Bears made it to the big game.